The ECA solution anolyte was assessed over various concentrations and exposure periods as an antimicrobial agent for the inactivation of the microconidia of Fusarium oxysporum cubense (Foc), a fungal pathogen of global significance responsible for Fusarium wilt or Panama disease in banana plantations. As part of the same study, the same solution was evaluated for its antimicrobial efficacy against Fusarium circinatum, an economically important fungal pathogen responsible for pitch canker and root rot in pine seedling nurseries. It was found that the anolyte applied at a 1:100 dilution rate, with a 10 minute exposure was effective in eliminating both Foc and F. circinatum at initial challenge levels of 104 microconidia spores per ml (Groenewald et al., 2002).

A similar study was conducted to evaluate the antimicrobial efficacy of the anolyte against common fungal and bacterial pathogens present in intensive hydroponic systems. The anolyte was tested over a range of concentrations and exposure periods against water borne Pythium zoospores, Fusarium conidia and the gram negative bacterium Ralstonia, and in all cases a 100% kill was recorded after a 10 minute exposure at a 1:10 concentration (Bagnall, 2007). ECA solutions were applied at inclusion rates in excess of 1:20 (Bagnall, 2007).

Furthermore, the inclusion of anolyte into the recirculating irrigant water at a rate of 1:50 resulted in a 43% increase in biomass yield relative to the untreated control in a small scale hydroponic study (Labuschagne and Bagnall, 2003). An assessment of the ability of this ECA solution to inactivate Tobacco Mosaic Virus (TMV) indicated that the exposure of the virus suspension to a 1:200 strength ECA anolyte solution for a 10 minute period, resulted in a 99% inactivation of the TMV and the prevention of lesions on the leaves of challenged tobacco seedlings.

In both agriculture and fruit and vegetable growing, yield is related to the quality of pest control or the prevention and effectiveness of treatments.

Anolyte is used against the formation of viruses, fungi, germs and bacteria in field and fruit cultures as well as in viticulture.

A special technology allows the production of a risk-free biocide product (fungicidal, germicidal, bactericidal) in the form of Anolyte.

A good disinfection increases the yield considerably. Anolyte is an excellent natural biocide product to reduce the germ count.

With Anolyte the dependence on chemical preparations is reduced or avoided.

Anolyte is supplied as a concentrate and is diluted and sprayed at a ratio of 1:100.

The application takes place in 3 steps: 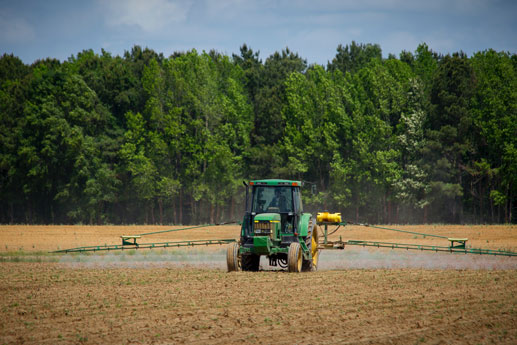