The creation of H302 on water-loving surfaces

Hydrophilic surfaces as a mean for the formation of EZ water

Hydrophilic or water-loving surfaces are wettable layers. Wettable means that water can adhere to it. Wood, metal, glass or stone, but also living organic structures provide such surfaces. Muscles, cell membranes or cell organelles such as mitochondria or cell cores are also hydrophilic.The inside and outside of the cellwall, as well as the small power plants within the cells, the so-called mitochondria, are wettable. Thousands of these cell organelles move about within a single cell – equipped with water-loving surfaces.

Water changes from an unstructured state (H2O) into a structured state if it contacts hydrophilic surfaces. It suddenly assumes a specific order that could be described as structured water. The previously described aggregate state of water forms on the surface of the hydrophilic structure: a structured, quasi-crystalline form of water. It is no longer H2O – as in so-called bulk water – but H3O2. This new water structure with new properties is similar to a honey comb:

In summary: The new aggregate state of water around the hydrophilic surfaces has a strong negative (-) charge, and all positive charges (+) are transferred to the adjacent layer in its vicinity. The adjacent layer of normal unstructured water (H2O) – so-called bulk water – is now filled with positive charges and consequentially has a strong positive charge. A strongly negatively charged zone (H3O2) has been created next to a strongly positively charged zone (H2O). The two layers act like two opposite poles of a battery with a powerful voltage gradient. 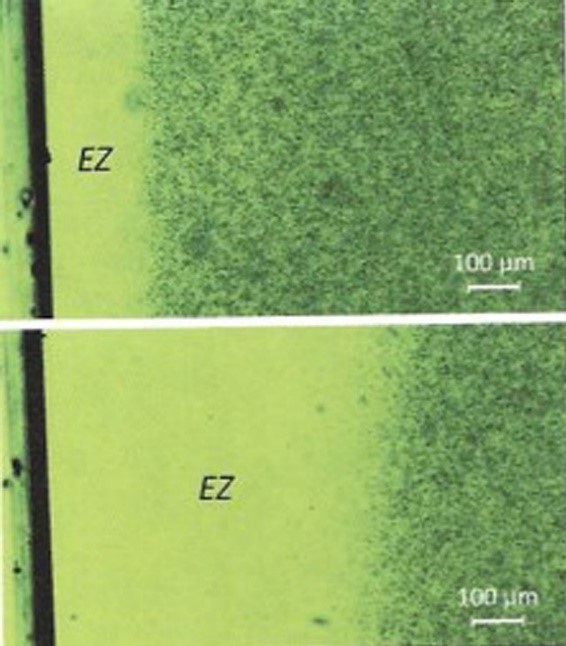 An image of EZ water beside a hydrophilic surface (dark, left); the lower image shows a massive enlargement after only a few minutes of radiation. (The Fourth Phase of Water, Gerald H. Pollack 2013)

< The fourth dimension of water