Usage of a batch ionizer for producing ECA water

Batch water ionizers are very popular in the CIS states.
However, these do not meet the demands of electro-technical or hygienic European standards.

The reason for the high acceptance in the CIS states and the Baltic States are due to the research of the so called “Taschkent Team” under Stanislaw Alechin.
He geared the medical discipline of the major research project toward electro activated water in 1978

He published in 1998 the extensive “Guidelines for the use of electro activated aqueous solutions for prophylaxis and treatment of the most common diseases of humans.”

These medical guidelines were only partly translated into German. They are based on the use of a batch ionizer to produce electro chemically activated functional water for the most diverse medical uses.

This is how it works: One mixes certain minerals into a defined water (usually reverse osmosis water) and starts the electrolysis process.

The production of “anolyte” is the most known, a very effective and environmentally friendly disinfectant, which is used in practically all Russian hospitals. It is produced with a saline solution. This only takes 30 minutes with the Aquavolta BTM 3000. Hypochlorous acid (HCIO) is produced in the anode chamber during electrolysis. This is one of the most effective disinfectants that exists. The “catholyte” (NaOH) is produced simultaneously in the cathode chamber as a minimally buffered solution.

Catholyte is an environmentally and skin friendly fat emulsifier. Even with a very high pH value of 12 and a low ORP from (-)800 mV (CSE) and 1600 micrograms/l dissolved hydrogen, is it very skin friendly and not at all corrosive like a caustic soda with the same pH Low salt dosage with the included measuring spoon After 30 minutes 2 types of electro chemically activated (ECA) water are produced.
Already with 2.5 g salt CATHOLYTE forms, with a pH 12 and an ORP of (-)790 mV (CSE) by 1.6mg dissolved hydrogen (dH2) ANOLYTE is created in parallel and has a pH value of 2.7 and an ORP of (+) 1000 mV (CSE) value.

For each liter of reverse osmosis water, de-ionized water, 1 - 5 grams of salt are added so the result is a solution with almost no buffer. The effect takes place because of the huge surplus of OH- ions which occurs during the 30 minute electrolysis. Catholyte is also used in alternative medicine, for example for cancer treatment. 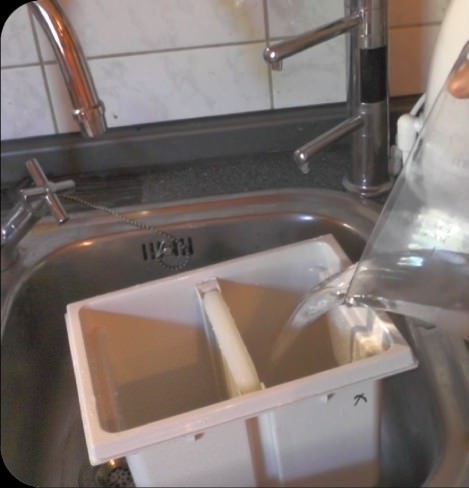