Hydrogen As A Healing Gas

The importance of dissolved hydrogen

In the 1970’s Vitold Bakhir discovered apparent abnormal properties of electrolyzed water.
This lead to a gigantic water research project in the former Soviet Union.
It was found out that some natural waters which were considered to be extraordinarily healthy had the same properties.
The ORP. An electric parameter which usually had not been observed in water before that time.
In former times the change in pH and mineral content was the only thing discussed.
This extraordinary ORP could not be calculated with the chemical formulas known to this time because the relationship between pH and ORP was different.

But Bakhir did not open up a new field in chemistry, as he claimed.
He hadn’t calculated that hydrogen with an ORP of 0 mV (E0) has a remarkable influence on the ORP of the leftover water if dissolved in it.
Dissolved hydrogen simultaneously plays the same role, especially if the normal balance between hydrogen and oxygen is changed by diaphragm electrolysis in one way or the other. 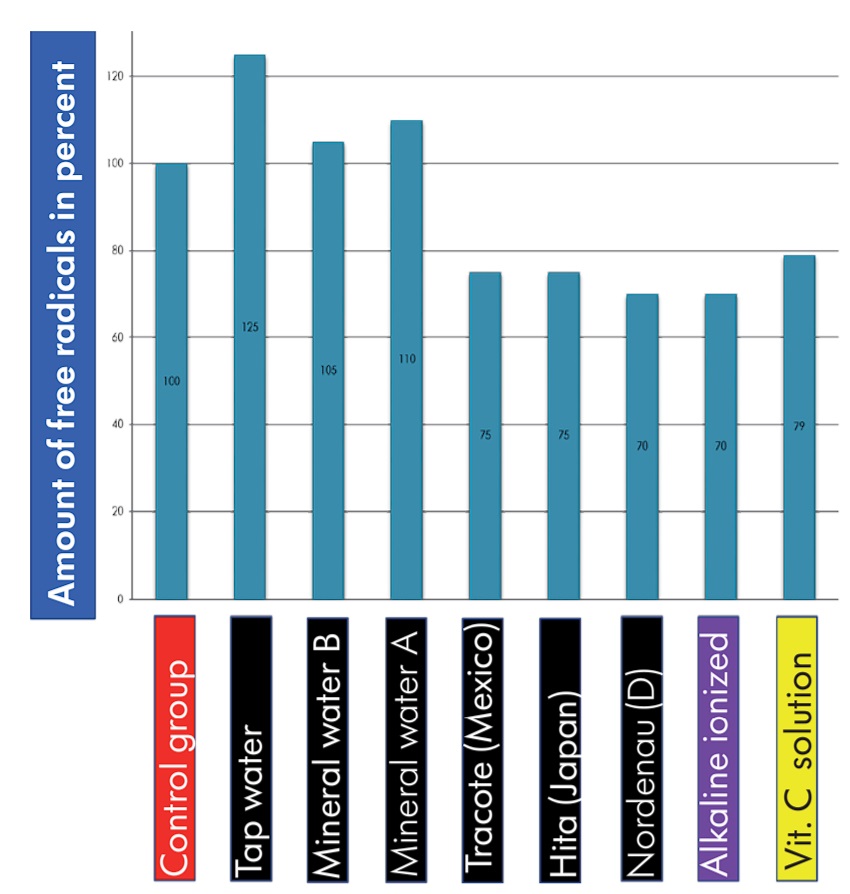 In the late 1990’s a Japanese group of scientists, lead by Sanetaka Shirata, discovered that dissolved hydrogen is especially responsible for the healing effect of water in general. 10) They compared natural curative-medical waters with artificially produced alkaline electrolyzed water with vitamin C. Both of them have an antioxidant effect on free radicals that cause diseases

The proof that free radicals were scavenged by atomic hydrogen (H) was obtained in 1997.

In 2008 Shigeo Ohta added the proof that molecular – that means gaseous-hydrogen (H2) possesses a selective function for scavenging the most dangerous free radical, which is the hydroxyl radical. 11).
Additionally H2 is able to reload naturally occurring antioxidants in the body,
like Gluthation, vitamin C, Q 10, Catechin and vitamin E.

Since that time hydrogen therapy as a medical gas is one of the top medical researching hotspots worldwide.

Chart according to Dieter Männl, Hydrogen - A topic for new medicine, Hamburg 2014