On pages 6-7 of this book you can see a lot of names. Some people really think, all these terms mean the same kind of water treatment. They buy a water ionizer and think, this is just a filter. Or that it produces only alkaline and acidic water.

Even some scientists do not always use the correct terms. The most popular scientific term for decades was „alkaline reduced water“ (ARW). Chemists like the word. They learned that „reduced“ means: I have got an electron.

But water, a molecule named H2O, does not get an electron to be named as „reduced“ and written H2O- . What gets an electron is H+, which is one of the two Ions that form water. This H+ Ion is reduced at the cathode of an electrolysis cell and becomes a hydrogen-atom (H). Immediately it combines with a second H-atom and forms a H2-molecule, which is a gas. Both, the H-atom and the H2-molecule, are reducing, because they tend to give away an electron to other partners in a chemical reaction. So the correct term for cathodic water should be „alkaline reducing water“.

So even in science is a lot of confusion around that what a water ionizer does – and what it does not. Some even say that the term „water ionizer“ is nonsense. Although I think, it is a better term as „reduced water“, because during electrolysis water molecules are dissociated into the two water ions H+ and OH-: The reason for the criticism of the term „water ionizer“ is that is not due to electrolysis if water dissociates. Water dissociation (autoprotolysis) is a natural fundamental process in water. But water electrolysis amplifies the process of dissociation, because water ions are de-ionized (reduced or oxidized) at the cathode H+ + e- –> H (reduction) and OH- – e- –> O + H+ (oxidation) at the anode.

So the term „water ionizer“ at least describes, what finally happens in a diaphragm water ionizer: In the end you have more water ions in each chamber as in normal water.

Since the nature of electro-activated water was not under- stood up until recently, since 1931 over 50 different descriptions have emerged. Originally, the inventor Alfons Natterer spoke of acidic, alkaline and neutral electrolyte water. Decisive is, since then, the electrolytic production as opposed to, what I like to call, “chemical water ionizers”.

Since in Japan because of other cell construction, initially only the alkaline and acidic variety were produced, the term “Alkaline Ionized Water” was developed for the drinkable alkaline part. This is an unclear definition. 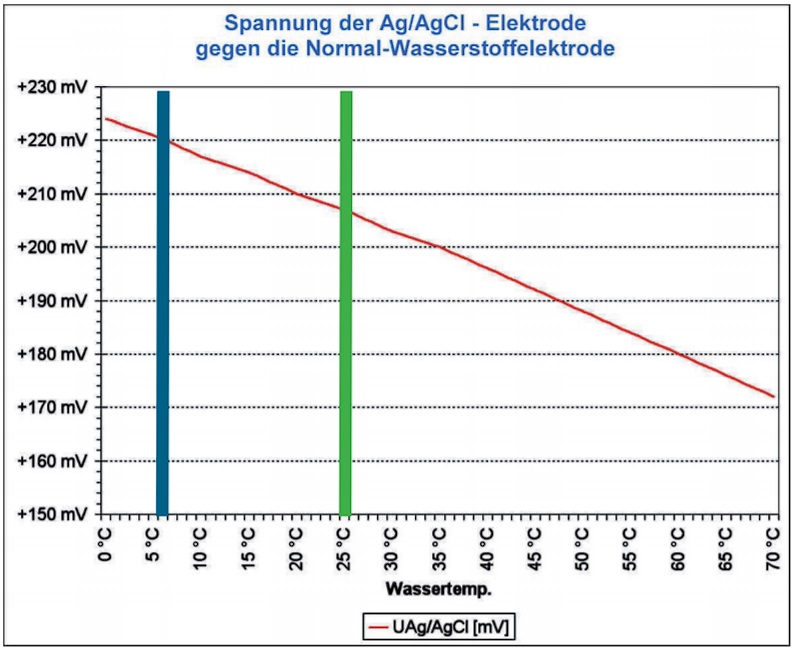 Above: Voltage Comparison of standard hydrogen electrode (SHE) and usual Ag/ AgCl Electrode (CSE) - red line - at different temperatures. At a normal water drinking temperature from the tap (blue line) you have to add 220 mV to the CSE value, at room temperature (green line) 207 mV to get the SHE value.

The counter term of alkaline activated water is acidic ionized water. Often it is referred to as oxidized water.

Later the term brought up by Dina Aschbach in a book: “ionized water” is an unfortunate choice of words, because it only brings the water ions to the foreground. The electric activity of the “activated water” does not found itself directly on the alkaline or acidic character, which is produced from the OH- and H+ water ions, but rather on the enrichment of dissolved oxygen in acidic water and the enrichment of hydrogen in alkaline water.

These are the values that can be measured with a SHE electrode (hydrogen electrode). Since in practice one almost only measures with CSE electrodes (silver/silver chloride electrodes), are the values up to + 1000 mV (CSE) on the oxygen side and from -800 mV on the hydrogen side.

These are values measured at 25º C, where the difference between the measurement method and SHE measurements amount to a difference of + 207 mV. The relationship with other temperatures is illustrated in the following graph
(from http://www.angewandte-geologie.geol.uni-erlangen.de/paramete.htm)

It is one of the favorite school experiments of chemistry teachers and students.
Thanks to its clever design the equation can be clearly demonstrated. In any case the Chemistry teacher has to “trick” in order to show that both gases are formed with the ratio 2:1.
If the water is not saturated by both gases, then a ratio of 1:2,5 results with the different dissolving powers and the dissolving speed (oxygen to hydrogen). 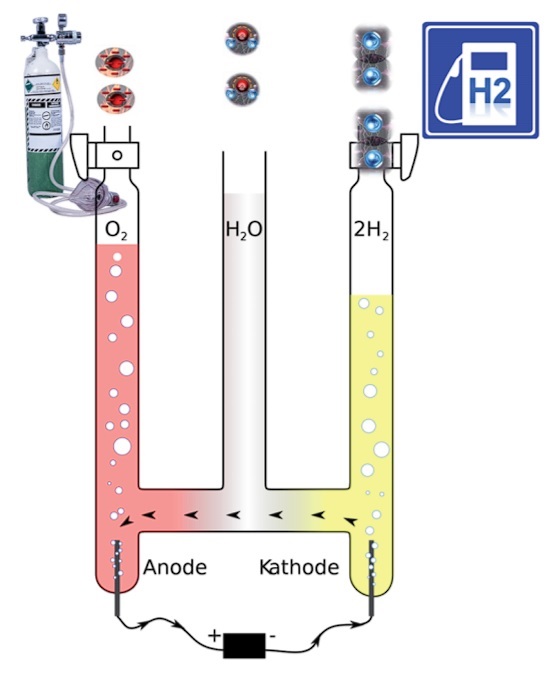 As opposed to a hydrogen electrode (SHE), gold has, for example, an ORP of + 1680 mV, whereas lithium shows – 3040 mV. Due to the voltage difference one could make a lithium-gold battery with 4720 mV (4,72 Volts). A minus value means that an electron surplus is present, a positive value means a tendency to accept electrons.

The water molecule H2O is composed of two reacting partners, H2 and O. Oxygen (O) has a positive ORP with + 1230 mV compared to H2, so “greedy” for electrons. This voltage difference of 1230 mV is constant with all pH values and measuring methods, even if the values of both reacting partners with increasing pH values sink. See chart above.

With drinkable alkaline activated water, with a pH of 9.5, is the ORP of H2 has sunk furthermore -700 mV. This is at room temperature.

So the ORP becomes positive. The chart left shows only what happens in pure water. In normal drinking water there are a lot of other ions that can in influence the ORP values measured with a CSE electrode. 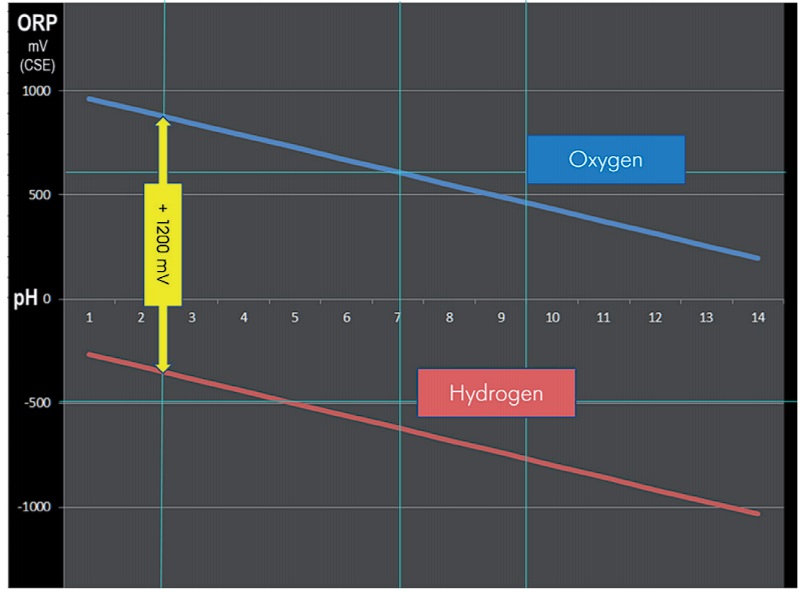 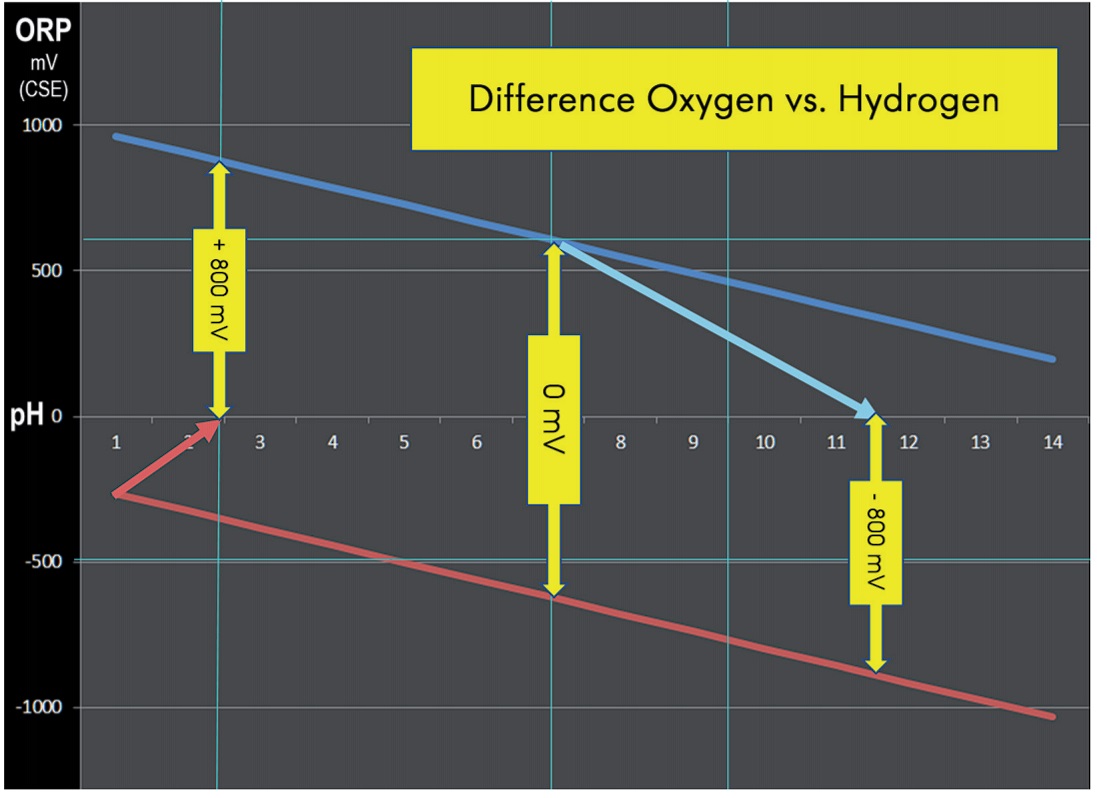 So there are 3 basic parameters which define the value of alkaline activated water:

These 3 basic parameters compliment each other. Their simultaneous availability is exclusively reached with an electrolytic water ionizer with diaphragm electrolysis.
Neither chemical water ionizers or electrolysis devices without a diaphragm or Hydrogen Rich Water generators cannot reach the compliance of these parameters.

The first person, to my knowledge, who used the term “alkaline activated water” journalistically in Germany was Engineer Dietmar Ferger in his 2006 published book:

“Alkaline Activated Water – how it works and what it can do.”

The extended version of this book is also available in German, with the title:
“Jungbrunnenwasser” (Fountain of youth water).

Dr. Walter Irlacher and I also used the term „alkaline activated water“ in our book “Service Handbuch Mensch” (Service Manual for Humans), which first appeared in 2006.

In 2008, together with Ferger, we delved deeper into the topic with the book and documentary “Drink yourself alkaline – a short guide to alkaline activated water”.

In 2008 the interest was dominated by an electrochemical measure value, which alkaline activated water, alongside its increased pH values, also possesses: The negative ORP. The Russian researcher Vitold Bakhir believed to have proven, that the ORP is abnormally low and not explainable with the classic ORP chemical equations. The ORP of the acidic activated water was also abnormally high and seemed to also be unexplainable.

In 1997 Sanetaka Shirahata had hypothesized that only atomic hydrogen can be the cause for the antioxidative effect of water. He could establish such an effect with types of water, which didn’t have an abnormally negative ORP yet contained atomic hydrogen. One of these waters he tested positively with a content of atomic hydrogen was a natural water from Nordenau in Germany.