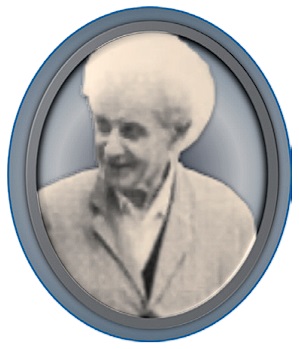 Invented in 1930 in Munich the electrolyte water “Hydropuryl”(3 varieties) and registered it as specialty medicine.

All knew how it works, yet only he did it. The Munich Engineer Alfons Natterer wanted to standardize beer brewing with optimized water. Since no one showed an interest, he gave his electrolyzed water to doctors to test it in 1931.

Natterer diligently collected reportsand assessments,and was not put off by the destruction of his water factory during World War II.He distributed the “healing water from the plug” at high prices to pharmacies and license holders.

The New Water of Life

Massive, with a wide roof, stands a house on the mountainside above Berchtesgaden. Many locals and Austrians close to the border, also countless numbers of holiday makers and winter athletes go on a pilgrimage to this house to get electrolyte water,which they call “wonder water”. The white haired inventor, Alfons Natterer, gladly shows inquisitive visitors his inventions,with which he produces his popular healing water.On the walls stand the divided containers, filled to the brim with potential electrolyte water, above and next to them there are electric devices,measuring instruments and glass containers.The electricity flows through the water in the container for days, and it is very important for the quality of the water, that the processing time and the desired current density is maintained.The success of this electrolyte water is very frequent. Doctors confirm that this unique water has a direct influence on about seventy percent of all illnesses,and all possibilities have not been exhausted. So far doctors prescribe drinking cures with electrolyte water especially for stomach, bowel, liver,gall, kidney and bladder problems,for circulatory disturbances, signs of ageing, chronic headaches, migraines,rheumatism, gout, loss of appetite and similar symptoms. Underdeveloped children will become strong and healthy when enjoying a daily glass of electrolyte water.

It is very striking to see how the vital force in electrolyte water works on young animals. Growth is promoted and the susceptibility to epidemics is noticeably low. Also plants with flowers react strongly after being watered with electrolyte water.The leaves become a luscious green, the plants grow quickly,and blossoms and fruit become very big and very colorful. Yet it is too early to now talk about plant cultivation with electrolyte water, because the present production process is still too costly.The producers would like to merely demonstrate with this attempt the astonishing power which is found in their creation. These powers can be primarily traced back to the electricity stored in the water. As is known, water contains minerals, like iron, cobalt, sulphur, calcium,and so on. These are processed with the electrolysis method, a so called ion migration takes place. The procedure is similar to smashing an atom. The minerals and trace elements are charged electrically and together with the germ free water contribute to the healing and strengthening effect. 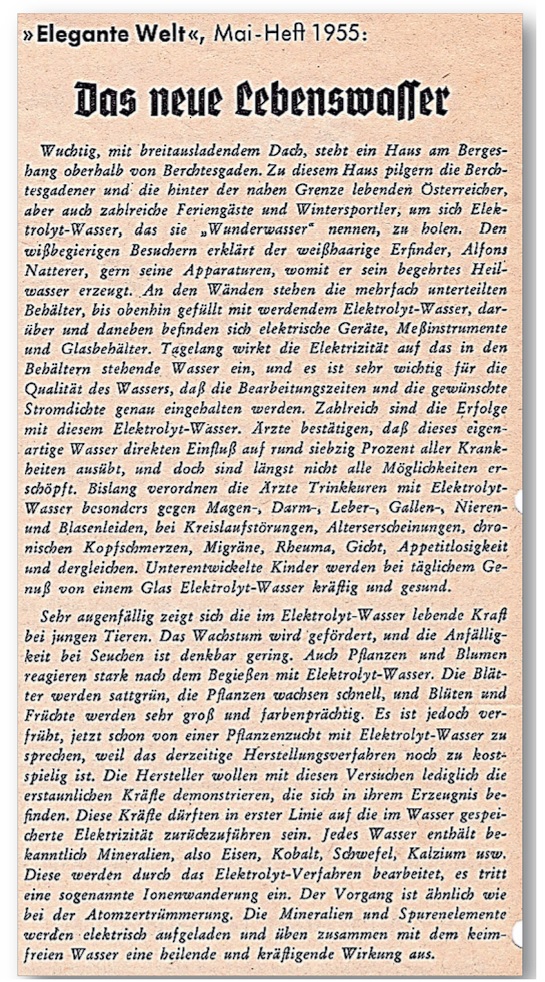 „The Munich Water of Life“

„After reports from south Germany can fowl pest and many other animal diseases be averted and in the future also prevented. And not only that; with the same means that prevents the diseases,can a faster growth also be achieved in all suckling animals, especially with poultry.
These unbelievably sounding effects are not reached with a new serum, nor with hormone injections and not with concentrated feed, simply with water. It is however, a special water, namely electrolyte water, which is recently produced in large quantities and on the market.
Specially chosen spring water is worked on for days in special apparatus with a high electric current.
A certain device ensures that from one water during two days three completely different electrolyte waters are produced.
Two types are used for animal breeding. They are absolutely germ free and can be stored for years.

The chicks like to drink electrolyte water. After a few days it can be established that the chicks have a preference for the electrolyte water over the usual well water.
Three to four week old chicks which were given from the beginning electrolyte water are not only livelier, but almost twice as big as the siblings of the same age; they don’t get ill, even if an epidemic breaks out in the same hen house, and after four months are fully grown.

With carrier pigeons an enhanced performance was determined,if during their flying time the well water was replaced with the new “Munich Water of Life”. This water is excellent for the rearing of young stock. Up until now the company did not lay much weight on the discoveries with animal tests,these were just the means to a cause, to prove the healing capability of electrolyte water on people who are ill. The results with people are astounding. Around seventy percent of all known diseases are influenced by this electrolyte water,especially stomach, bowel, liver, gall, kidney and bladder problems, migraines, rheumatism, gout, circulatory disturbances,chronic headaches and so on.

After previous experiences and successes with the “Munich Water of Life” it can be assumed that this electrolysis procedure will bring us a few interesting surprises. As we hear,these apparatus for making electrolyte water will be produced in series and should be delivered to sanatoriums,hospitals,large companies, animal breeders and large gardencenters.“