With the increasing meaning of the hydrogen factor have some producers of electrolytic water ionizers developed new ideas, to store more hydrogen in water. Some of them are interesting. Others not. I would like to commence with the weaker methods which can’t store that much hydrogen in water,yet compared to the relatively high purchase price of a classic alkaline water ionizer with diaphragm electrolysis is clearly cheaper to produce.

What is common of all these devices is that the producers are keeping an eye on the hydrogen content.
They simply explain this as being unnecessary, that water should also be alkaline and that oxygen should be removed because of its oxidising character.
Also the removal of anions is seen as unnecessary, as well as the increase of the amount of cations in alkaline activated water.

The pH value is passè for them. Hydrogen content is everything. On the following pages I will highlight the most important technologies developed since 2010

The easiest way to produce hydrogen water is with a 1 chamber electrolysis cell, in which the cathode and anode are not separated by a diaphragm.
So oxygen and hydrogen is “dissolved” at the same time.
Namely to the ratio 1:2. That is the formula for oxyhydrogen gas. The producers certainly avoid talking about oxyhydrogen gas ionizers since it is explosive and can be dangerous – yet not when in an aqueous solution and in these amounts.
They emphasize exclusively the hydrogen and speak of “Hydrogen Rich Water” generators.
My personally favorite expression for this is the “Double Bubbler”.
Technically they are very easy. They really create with little effort hydrogen gas in the water, which normal drinking or mineral water does not contain.
Really hydrogen rich is this water not.
But one can claim that this water is sufficient for a better hydrogen supply and has certain antioxidant effects.

The advantage:
a simple power supply from a battery that can be recharged with a USB cable. Up to 20 liters of water can be treated when on the go and without a socket.
With an OXY-Hydrogen Generator is oxygen not only removed, it is even added. Like this the dissolved oxygen functions as an opposite pole to hydrogen and the ORP will never be as low as with an ionizer. But that doesn’t matter, say the supporters of this technology.
If one doesn’t want alkaline activated water, but a neutral sort, can both alkaline and acidic outlet hoses be led into the same glass. You will measure an ORP of about 0 mV, even though the water contains relatively a lot of hydrogen.
In this case you also have the free OH- and H3+ ions. I find this to be a more interesting way, also if the “Double Bubbler” is by all means interesting when on the move. 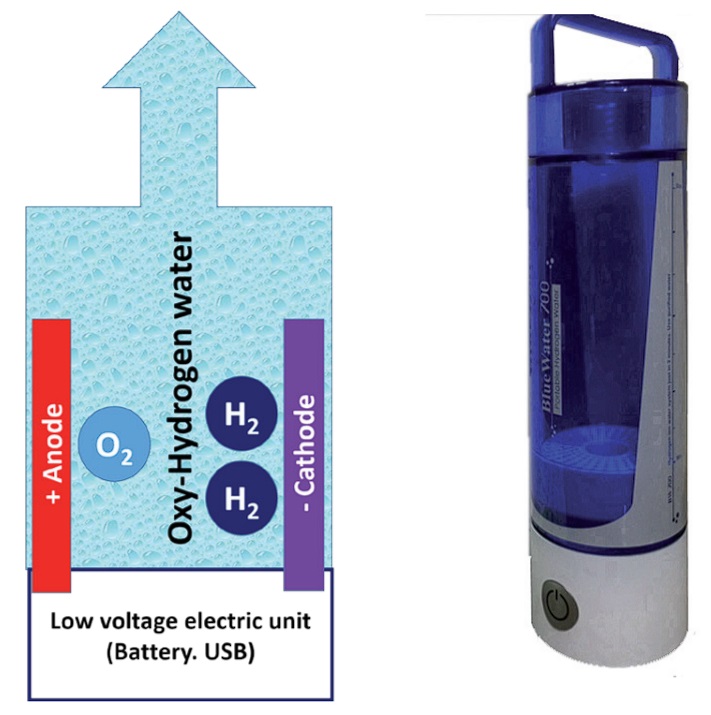 Nevertheless:
Abnormally low negative ORP measurements, something performed by a diaphragm water ionizer when making alkaline activated water, always show very clearly, that this is a water with exceptional properties.
And exactly there lies the since 80 years discussed and still not completely understood health benefit.
Therefore not every ORP measurement from the start is nonsense.And thus also over 1000 Russian doctoral thesis based on this, are suddenly a thing of the past.ORP measurements can be quite useful, especially there, where direct hydrogen measurements are difficult or not even possible.
This affects especially the analytics of body fluids like blood, or the quality analysis of foods or soil samples in agriculture or aquaculture, where ORP measurements have been established a long time ago. 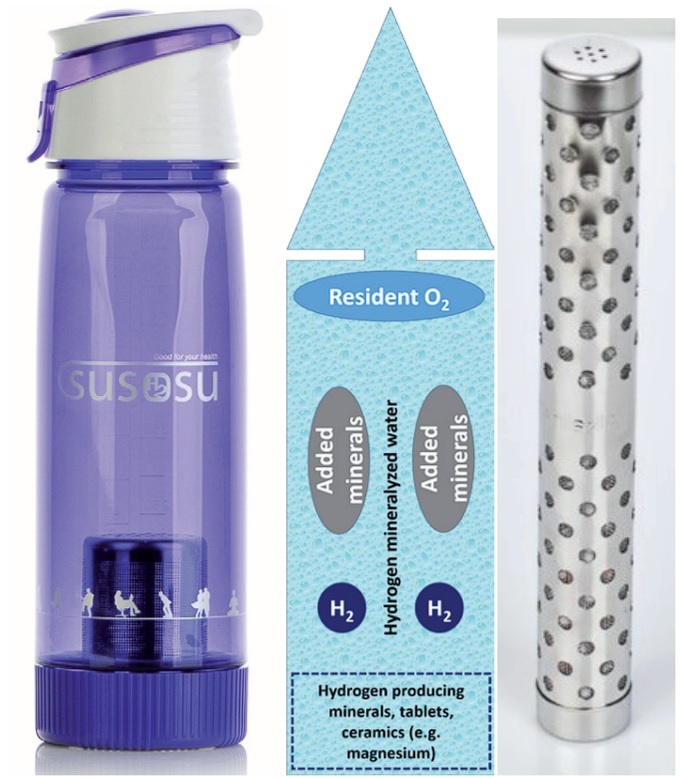 Chemical hydrogen generators like H2-tablets, some ceramics or hydrogen producing minerals like magnesium add no oxygen but do not remove the oxygen gas that is normally already resident in water. So you get a water with enriched hydrogen content but not a really hydrogen rich water.

The best chemical hydrogen generator I found, stored 1200 ppb hydrogen in water.Which is good.But it took 12 hours to get it.This is not compatible with a normal lifestyle.So other designs of electrical water ionizers have been developed that can „dissolve“ up to 1500 ppb within some seconds.

In the meantime the established ionizer industry has developed devices that can dissolve up to 1500 ppb of hydrogen in normal water and within seconds.

These so called Hydrogen-Infusion-Machines (HIM) work with PEM-cells, that contain a diaphragm and two chambers, of which only one is flooded with water.

The second chamber is the gas-chamber. Also water from a HIM-machine, which can create up to 1200 ppb, secretes gas bubbles over time even quicker than water from a water ionizer.

The water also does not become alkaline, it keeps its original pH value.

With previous models with this kind of a basic structure is the pictured ozone catalyzer missing, for the produced ozone amounts do not overstep the threshold quantity.

Also if the ozone, created with electrolysis and oxygen, leaks into the inside of the housing do sensitive noses notice the typical pungent smell of this reaction product of this highly creative gas.