In a classical diaphragm water ionizer also some mineral ions can pass the diaphragm, e.g. calcium. If we ionize 2 liters of water we get the dissolved calcium of 2 liters into one liter of alkaline electrolyzed water. Or better said most of it, about 60 % – 80 % depending on some other water parameters.

The increase and decrease of anions and cations when passing the membrane can be determined within a second by using a test strip.

For example, the migration of Calcium-Ions during electrolysis can be determined by Aquadur® strips: 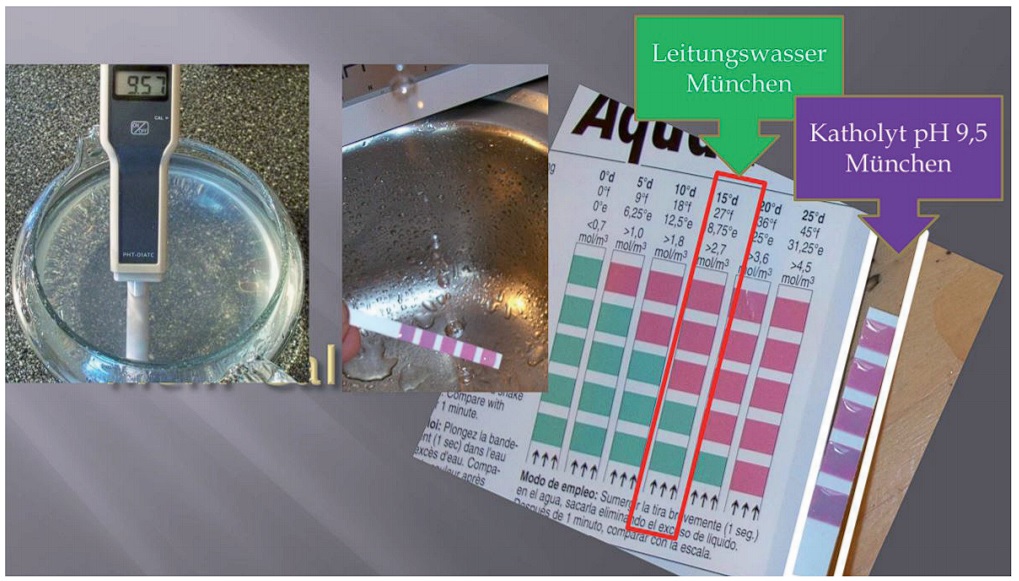 Another example is a test with Volvic® mineral water which has basically a very low calcium content.

Only one indicator is colored red. I took samples from the alkaline and the acidic compartment of a batch water Ionizer. Before electrolysis (above) both strips show only one colored field.

In my eyes this is a proof that during diaphragm electrolysis at least the ions of calcium migrate through the membrane and enrich the activated alkaline water. 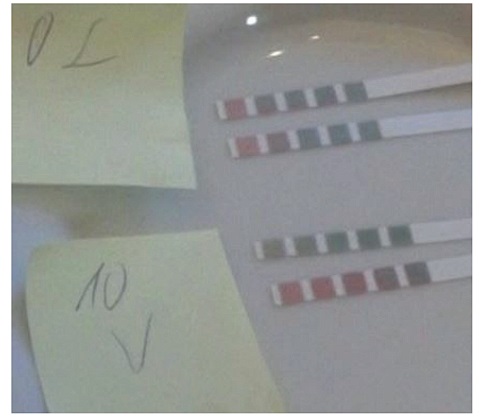 Also the migration of Cl- and Nitrate Anion can be easily detected from the cathode to the anode compartment by simple test strips.

Of course, almost any tap water contains calcium ions which can pass the membrane from the anodic compartment to the cathodic compartment. I have illustrated this on page 26 of this book.

This is very important to illustrate, that the health benefit of drinking electrolyzed alkaline water is not only based on its content of dissolved hydrogen, although this might be the most important.

Concerning the alkaline drinking effect, here is another test.

I took a Weisswurst (Veal sausage) intestine, which is from a sheep.
I poured in electrolyzed Munich tap water with a negative Oxidation Reduction Potential (ORP) of minus 286 mV (CSE) and a pH 9.5.
I placed it in a physiological saline solution, the well-known blood replacement, which was pH neutral and with a Redox potential of +194 mV was a little bit oxidant. All Aquadur® indicators remained green.The transfer occurred in 5 minutes. Afterwards we had a significant absorption of CaCo3 in our saline blood model (3 red indicators). In the saline solution only sodium chloride is present.That is why the test strips for water’s total hardness remain green in the salt solution.
But the electro activated alkaline water in the sausage was full of calcium and the test strips showed red in all 5 fields.
Yet half of this has travelled in this short time through the intestine 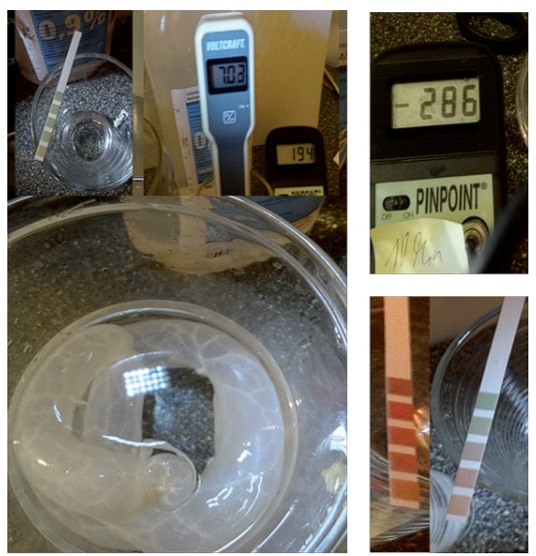 This is all I have to say to the annoying jargon on the internet that dissolved calcium in water, because it is inorganic, cannot be absorbed from water by the blood. You see the facts.
I always get a fit when I hear such things.

Now let’s look for the mechanism behind all this!

Again, we will take the Weisswurst (Veal sausage) intestine, pour in ionized Munich tap water from a water ionizer with a negative Oxidation Reduction Potential (ORP) of minus 226 mV (CSE) at 9.5 pH value.
The electro activated water sausage from Munich will be placed for 5 minutes in deionized reverse osmosis water with a neutral Redox Potential of zero (0 mV.)
This water has no energy. Yet, within 5 minutes, half of the voltage of the electrically activated water sausage has been transferred and the reverse-osmosis-water outside has now an ORP of (-)107 mV (CSE).
The decrease of the ORP to a balance between the outside and inside of the intestine is caused by the migrating hydrogen gas that can pass the intestine easily. 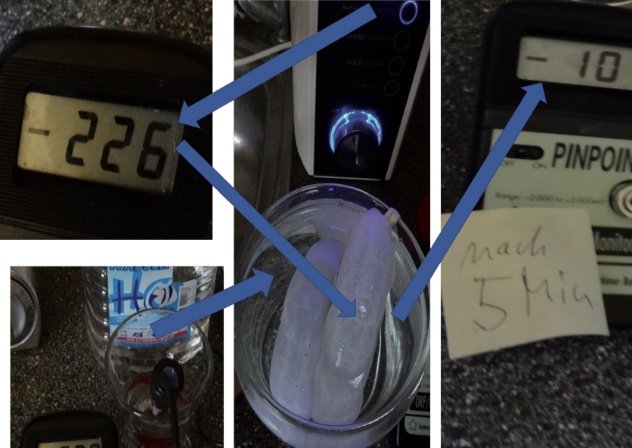 Many examples for these transfer possibilities you can read on pages 45 – 57 of this book.

< Is alkaline water now out of fashion?

Uptake in the Stomach >