Uptake in the Blood

Some sellers of water ionizers still believe in the micro cluster-myth. They call alkaline ionized water „structured“ or even „hexagonal water“. Small clusters would make this water better hydrating and other scientific nonsense.

The nature of water, if it is liquid and not frozen, is its quick ability to change its structure. So if you would have micro- clustered water during one fraction of a second, the next fraction of the same second it would have changed to another structure.

Anyway, it is clear that the frame of structures water can fill always depends on its content of solutes as well as on the type and pressure of the water surface.

If molecular hydrogen is dissolved (dispersed) in water, it changes its electrical behavior and shows an extraordinarily low Oxidation Reduction Potential (ORP).
It will be even much lower than the ORP of human blood, which is about – 50 mV (CSE). So it seems to be plausible that this kind of water can be more easily absorbed by the blood than normal tap water with an ORP up to + 500 mV (CSE). But no one has so far yielded for proof that it is so. 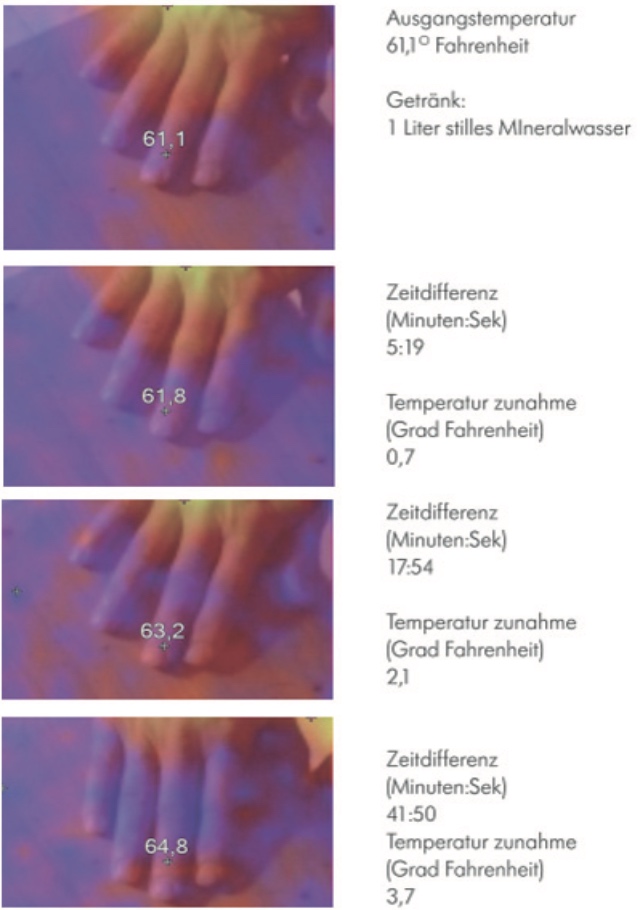 What seems to be sure is the phenomenon that alkaline electrolyzed water hydrates the body quicker than other kinds of water.
It is often quoted that the alkaline character of the low alkaline pH value of blood, with about 7,4 serves better than most acidic mineral waters or other drinks. (See chart p. 13)

It illustrates the following trial:

The temperature of the fingertips is a very sensitive indicator for the blood flow. If it becomes slower due to thickening of the blood because of lack of water, the fingers get cold. This can be observed from the outside with a thermography camera.

In our trial a person drank at 10 am 1 liter of water. The trial person did not eat or drink anything beforehand.

On the first trial day the trial person drank Gerolsteiner mineral water. This water from the Vulkaneiffel district counts as one of the best mineral waters in the world and has a very high mineral content. 652 mg/l hydrogen carbonate, 140 mg/l calcium and 49 mg/l magnesium.

The drinking of this water provided within 41 minutes 50 seconds to a higher blood circulation with a temperature increase of 3.7 degrees Fahrenheit.

The control trial the next day proceeded with alkaline activated water from a water ionizer, the following parameters show: pH 9.52. ORP (-) 236 mV (CSE).

The temperature increase within 44 minutes 05 seconds after drinking 1 liter was at 8.3 degrees Fahrenheit and was at 224% higher than the results from the previous day.

This pilot trial also shows that alkaline activated water can improve significantly the flowability of the blood. This comparison should also be carried out with other drinks that claim that they hydrate well.

Theoretically, the relaxing effect resulting from hydration with subsequent expansion of the blood vessels in the fingertips could also be responsible for the temperature increase.

Yet hundreds of before and after blood analyses by Dr. Irlacher indicate that drinking alkaline activated water causes a better fluidity saturation of the blood.

So the possible relaxing effect should, at most, be seen as secondary 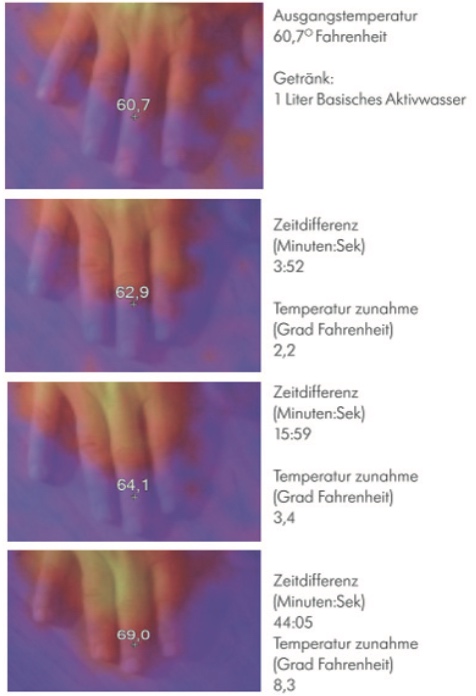 Left is the result with electrolyzed alkaline water pH 9.52, (ORP – 236 mV). Measurements were done before drinking before and afterwards.

The result: after about 40 minutes the temperature increased with mineral water 3.7 degrees, with electrolyzed alkaline water 8,3 degrees Fahrenheit.

So flowability of blood can be improved more by drinking electrolyzed alkaline water.

If more blood flows to the extremities, the oxygen partial pressure (pO2) will increase like in the following example.

< Uptake in the Stomach