Michael W.: Can small water clusters be better absorbed by the cells than water with bigger cluster formations? 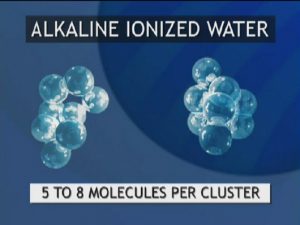 No.
This often cited assertion by advocates of alkaline activated water, like Dr. Robert O. Young, is naive (“small slips through better”) and does not correspond to biological processes.
Aquaporins are channels in the cell membrane that bring water to the cell.

All living things with cell membranes, from single-celled bacteria to human beings, possess these channels. Water clusters are electromagnetic clumps of dipolar water molecules (hydrogen bonds) that are torn apart by the more powerful electromagnetic and chemical forces of aquaporins. So only individual water molecules enter the cell through a clearly aligned channel. The separation and arrangement of the water molecules from clusters is of vital importance for the cell because otherwise over the Grotthuss mechanism (H + -Hopping via hydrogen bonds) is the proton gradient within the cell displaced and thus the energy production of the cell would be stopped.
It is often claimed that alkaline activated water is small cluster water. Due to the low stability of hydrogen bonds, are snapshots of the magnetic resonance imaging, used to show such clusters, not of relevant evidence. Here a certain influence of the measurement method should not be ruled out. Nevertheless, many manufacturers give a lot of money for these scientifically questionable measurements to produce spurious arguments for the marketing department. It is a scientific joke, but almost all follow the herd.

There are serious theories about water memory, so temporarily stable clusters in water. These set the presence and action of forces, which prevent the constant reorganization of the dipoles of the water molecule, for example, magnetic fields, low temperatures or pressure factors. The longest theoretically discussed stabilization method of water memory is 300 days at 1° degree Celsius. But under physiological temperatures 36,6° C. is the water memory present for only 24 minutes. (Vysotskii, V. et al, Applied Biophysics of Activated Water, Singapore, 2009, p.21). In the cell passage through aquaporins is any “water memory” reliably destroyed. So it is useless to argue with”water memory” in the context of drinking water.

A certain type of water memory at body temperatures exists in theory. This theory however, has long been in place in all physiological processes: radiation in the infrared range, which also emanates  from our 37 degrees well-warmed body, affects water at its border areas to a hydrophilic ( “water-loving”) environment and produces very tight hexagonal clusters that all excrete solutes, so a kind of distilled water is produced in a thin interface zone. The membranes of our body cells are made up of lipid (fat) layers, which are hydrophobic, i.e.: water repelling. Therefore, they are not in danger of bursting through the intake of too much hexagonal ultrapure water. The cell membrane consists of aquaporins, these allow a precisely required amount of pure water to pass. And separate ion channels arepart of a cell. These are specialised in absorbing the minerals dissolved in aqueous solutions in the needed dose.

This should have fully answered your question: small clustered water arises always routinely through aquaporins of the cell membrane. No matter what you drink: Whether you consume a stupid energy drink, breast milk or alkaline water – only water passes through the aquaporins into the cell. Therefore you also don’t dehydrate so easily when you drink a bottle of vodka, which contains only 60% water. The problem arises only with the other 40%, with your liver needs to handle ….

Other ways are used by the ion channels to serve themselves from the beverages and the food that you consume. Ion channels absorb on completely different paths the needed minerals into the cell. But even if you want to compensate the liter of mineral poor vodka during a recovery breakfast with 1 liter of mineral-rich tomato juice: your liver still has to deal with the alcohol.

What is the background of the whole cluster jabbering? Pure marketing tactics from manufacturers. Theories have no scientific ground to stand on. You should drink alkaline activated water for quite different reasons.

What are the real reasons that speak for this? A lot of the “milieu”, the environment of interstitial fluid in the spaces between the blood, lymph, intestines and the target cell is waffled on about. A little abstraction does well here: food (hydrocarbons + oxygen + mitochondria, the cell power force, produces chemical energy (hydrogen) + waste gas (CO2). The environment is disturbed mainly by too much carbon dioxide (CO2) which through breathing is not disposed of quickly enough. (Chemists might be astounded at this popular terminology, but sorry, I am a trained journalist and am sworn to expressing the simple truth).

The key question to any healthy metabolism is simply: where to put the waste CO2? (Remember, that our entire planet has this problem and politicians meet at climate conferences. Yes, our planet is a living organism! You didn’t know that? No problem – it will only affect the next generation …). Rubbish is a health problem everywhere. Only with ourselves can we not postpone to the next generation! If we in our bodies can not solve the dominant metabolic problem of CO2, which we so easily exhale through our main disposal organ, the “lungs”, what happens for example with acetic acid, which is produced from the breakdown of alcohol from the vodka? Where does it accumulate? Or the even worse, phosphoric acid being inorganic requires its expulsion from the metabolic system when mixed with sugar or apparent sugar from the cola mixer? Great: We even have two kidneys for that!

Do you really believe that your kidneys are built for this? How long can these people hold out their non-water drinking  path?

A part of the kidney produces the stress hormone adrenaline. Today’s lifestyle has a strong demand on us. So much so that many of us – myself included – cannot produce enough. Any serious allergy sufferers – like myself – always carry an adrenaline injection. Does this ring any bells? How does one relieve the kidneys? Of course, by avoiding stress. Great if you do that – I have not managed that yet. But I give my kidney less of a burden when I drink alkaline activated water. Like this I avoid acids from food and beverages. For alkaline activated water is, thanks to a phrase coined by Dr. Walter Irlacher, “the Perpetuum Mobile of deacidification”.

It always depends on one drinking enough water – in whatever form, which can also be from an orange or a beef broth. The aquaporins in our cells are like filters: they let nothing impure in. But our body, with its frontier organs like the tongue, nose, lungs and skin is a kind of borderless “Schengen Area”: We let pretty much everything in before we are allergic or throw up.
Would you prefer the problem be solved psychologically because you respond better intellectually? Well, it’s really a question of attitude. If you think that it does not matter what you drink, then no doctor, but only a psychotherapist can really help you.

But be careful: psychotherapist is not a well protected occupation title … Psychological problems arise, in my opinion, mostly because you can hear so many voices inside that one cannot deduce any kind of clear action which would bring you further. This is as if, you as a journalist only did research but never write an article therefrom. I am “only” a journalist. My experience: indecision after collecting all the facts does not give you a beautiful life. Life requires decision making.

You have chosen to ask me about “small clustered water” from a water ionizer. I have told you what matter is, in my view: it is pseudo-scientific nonsense. For every water is much faster than any cluster measurement technology. This is backed up science! Water clusters are not stable because they are environment-dependent variables. All who might have measured stable water clusters – and I have researched this a long time, do not specify the environmental variables.
The measurements are pure Milli snapshots without relevance to someone who wants to drink water. Within fractions of a second after the measurement at the outlet hose does alkaline activated water change, because its relaxation time commences immediately. Its duration depends on how quickly you drink it in its original form after electrolysis.
By drinking this water you create a completely different reaction environment for it, than if you were to fill it in an open carafe. Do you prefer to drink the water if it has already been processed by the air in your home?

Does this negative opinion on small cluster claims from manufacturers discourage you from drinking alkaline activated water? With all of the other advantages that have been proven? Then, either stop reading this book, or read on. I have many arguments that you have never come across.