Frieda S. : With your recommendations for water ionizers you always state the hardness levels in °dH (degree of German water hardness). In the analysis of my water provider these are stated in mmol/l. On mineral water bottles it is written in mg/l. How can you compare these classifications?

The conversion of the hardness of water results as follows:

Some water providers limit themselves to not publish a complete analysis. You only receive it when requested. 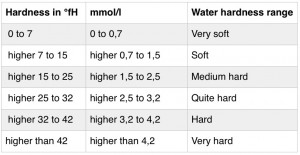 Many state solely the hardness of the German Washing and Cleansing Agents Act from 2007. Only 3 hardness ranges are in this act.
In Germany you have water hardness over dH 30. In the past, the stronger subdivided upper half above dH 15 was phased. So no one has to still claim that hard water was delivered.

Yet this difference still exists in Switzerland. In Switzerland you differentiate the hardness range according to 6 hardness levels in French degrees, respectively mmol/l as follows: