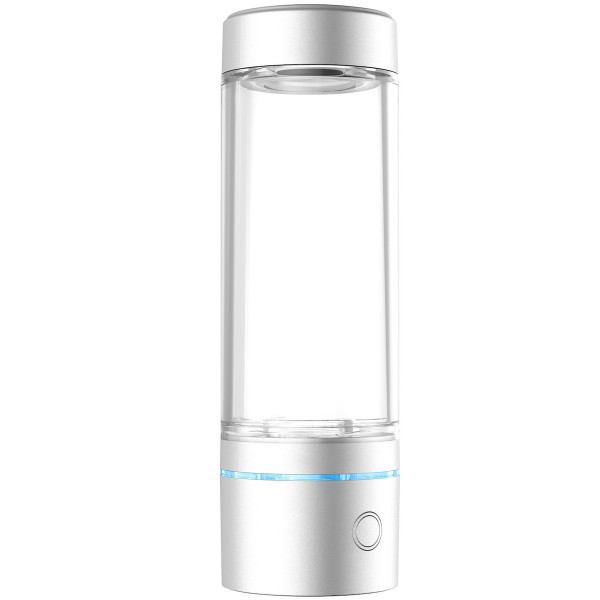 You can optionally order a matching pre-filter at a special discount: Either the Prestige filter or the Modern filter:

The Aquavolta® Nano Hydrogen Booster keeps the water neutral and produces no waste water. In return it can store even more hydrogen into the water than a normal water ionizer due to its high pressure technology. Energy on the go. Always and everywhere fresh.

Nano Hydrogen Booster for at home and on the road

For many years, it was considered axiomatic that active water retains its negative redox potential and thus its abundance of electrons for only a few hours to days.

But when it was discovered that dissolved hydrogen was the decisive factor for the antioxidant effect, an industry developed that pressed hydrogen at high pressure into multilayer water bags, where the content could be maintained for several months. However, such a bag containing 0.2 l of hydrogen water costs around €4 and also causes major waste problems.

We designed the AquaVolta® NANO Hydrogen Booster so that you don't have to rely on a single type of water. If you don't trust the tap water you have on the go, you can add filtered tap water and even water from a reverse osmosis (RO) system to your H2 booster. 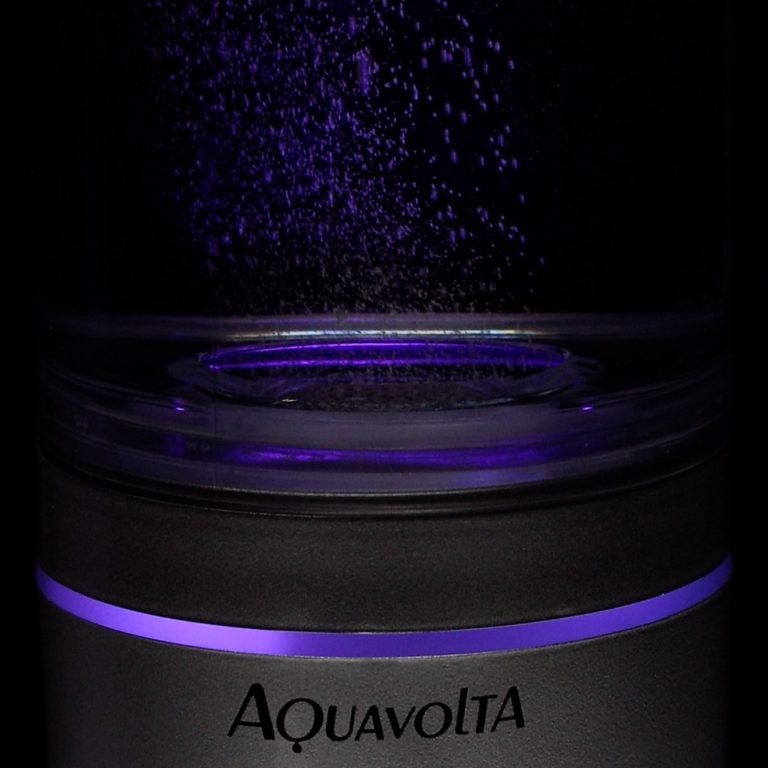 What is a hydrogen booster or HRW generator? 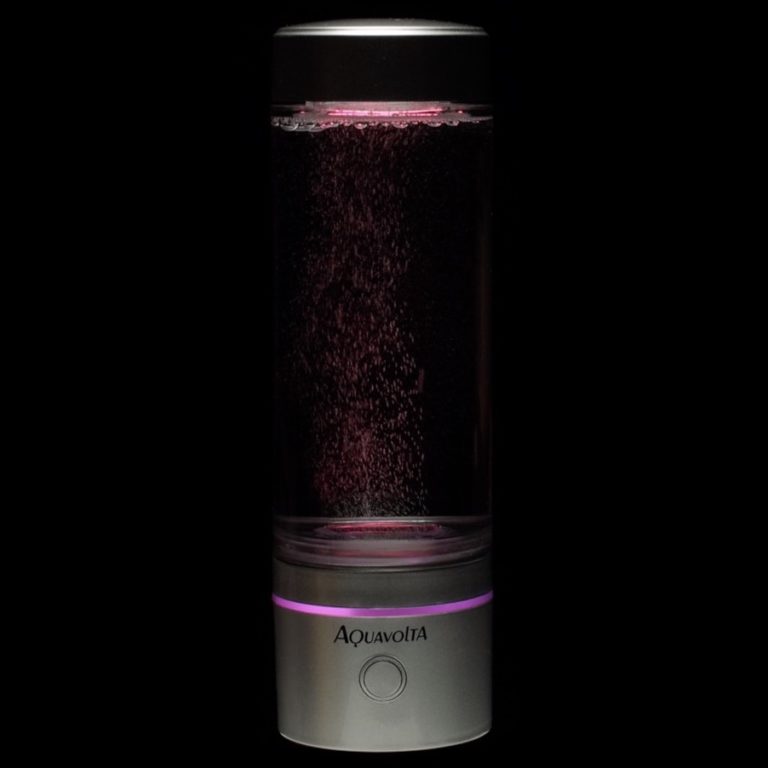 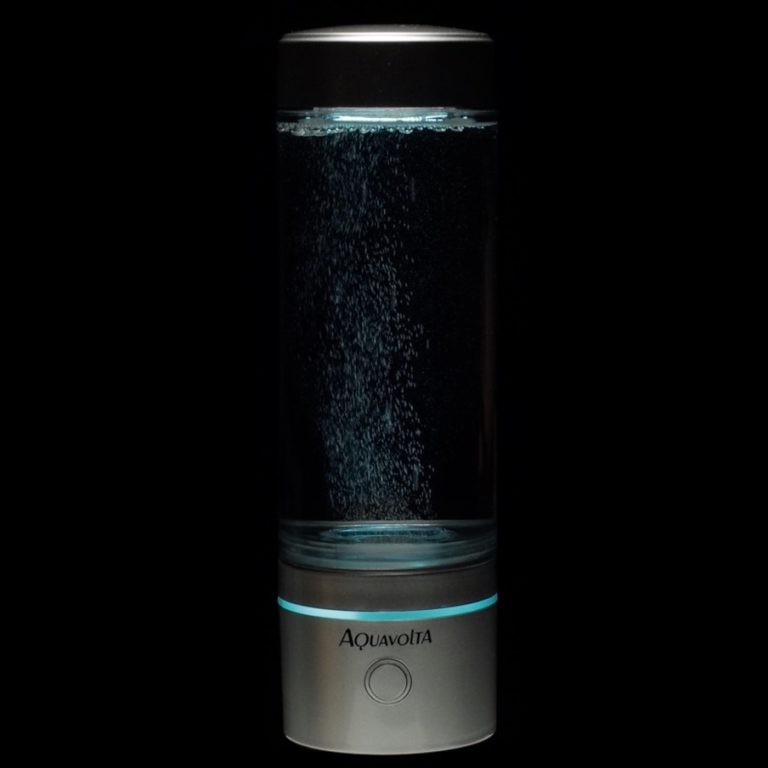 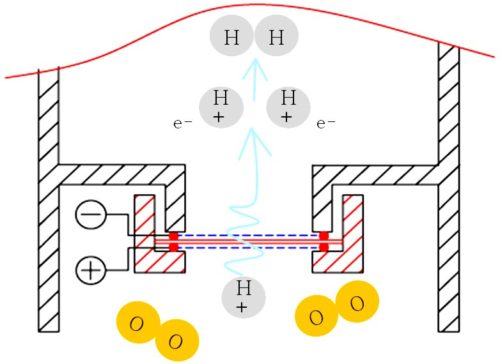 For an on-the-go device, it's clear that there's no point in making water more energetic with hydrogen if it doesn't meet demanding drinking water requirements.

That's why we designed the Nano Hydrogen Booster so that, unlike a stationary water ionizer, it doesn't rely on a single type of water. If you don't want to trust the tap water you have, you can use any trustworthy bottled water and even water from a reverse osmosis (RO) system.

However, thanks to the built-in bottle adapter, you can also ionize the water directly in the plastic mineral water bottle and enrich it with hydrogen, but we don't recommend it because it will shorten the life of the electrolysis cell.

The water must not contain carbonic acid. Otherwise, the gas pressure will increase too much overall.
A YouTube-cookie will be set, see also:
Privacy Policy
Hydrogen in drinking water | Electrolysis of H2O | H2 therapy

From redox potential to measurement of dissolved hydrogen in active water

In the past, only the redox potential was measured to determine the antioxidant effect of active water. But this is a very inaccurate and relative value, because the redox potential is influenced not only by the dissolved hydrogen, but also by the different redox potentials of the various substances dissolved in the water, e.g. minerals. (see also the video on baby milk powder and water selection).

After the role of hydrogen was recognized as important, a purported hydrogen meter came on the market in Japan (Trustlex ENH 1000) that sought to derive a dissolved hydrogen content from the measured redox potential via an experience-based conversion factor of approximately (- )2.14. However, this factor was criticized by numerous experts and Trustlex itself admits that the device does not work properly. 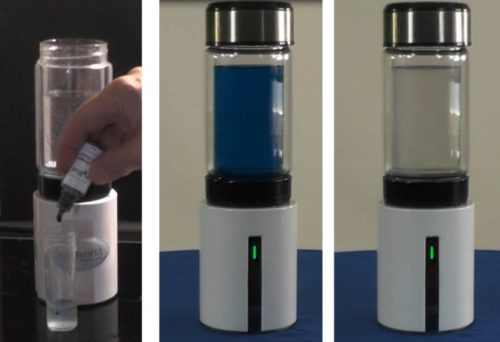 1 drop of the H2 Blue Kit ® is currently internationally considered to detect 100 ppb (0.1 ppm) of dissolved hydrogen in water.

The test of the molecular hydrogen content with the H2 Blue® Kit is carried out immediately after production. To do this, carefully fill a water sample of 6 ml into the measuring cup and add a drop of the blue measuring liquid. Each drop that decolors represents 0.1 ppm (=100 ppb) of dissolved hydrogen gas. If a drop no longer decolorizes on its own, you may stir gently.

If the liquid still does not decolorize, the last drop added to the water does not count. Water under normal atmospheric pressure can contain up to 1.6 ppm hydrogen gas (full saturation). With the AquaVolta® Hydrogen Booster you can also produce a supersaturated water with more than 6 ppm. However, this will drop back to full saturation within a few minutes when the sample makes contact with the normal atmosphere. If you want a lot of hydrogen, you have to drink fast.

Hydrogen water | Best produced with basic, already activated water from a water ionizer or even better, from the Aquavolta® H2 Rocket.

In contrast to alkaline activated water from a classical water ionizer, the pH value of the treated water is maintained in the nano. Hydrogen water can therefore also be slightly acidic, even if then not as much hydrogen can be stored as in a basic water. For example, we measure a significantly lower hydrogen content in an equally treated, slightly acidic reverse osmosis water than in a slightly basic mineral water such as Aqua Panna: the ratio is 1.2 ppm to 1.9 ppm for the mineral water.

The currently best water ionizer, which we produce ourselves here in the Aquacentrum, designed by Yasin Akgün and Karl Heinz Asenbaum, is the Aquavolta® H2-Rocket or integrated with a reverse osmosis membrane, the Aquavolta® Osminion. Both provide outstanding H2 values between 3 to 5 ppm. So as high as the Nano Hydrogen Booster, but the whole in flow! A very innovative, new approach. 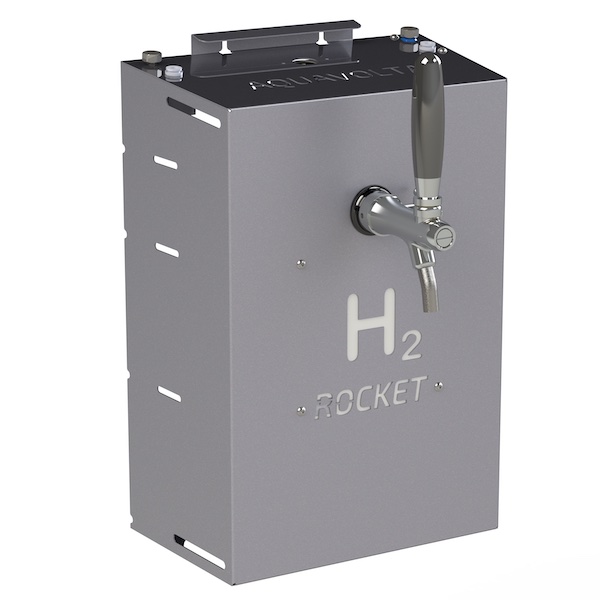 You can also remove coarse dirt by filling the pressure tank halfway with warm water and shaking it vigorously.... Then pour away the rinsing water.