The FAQ video interview about alkaline activated water is presented in detail by Mr. Asenbaum to deeply understand the subjects of water and water treatment. The video shows the most important questions and answers, which still cause doubt, for example: the subject about water and stomach acids. Below you will find our pool of collected FAQ’s and you can also browse through our FAQ database.

To receive the full presentation seen in the video, please fill out our contact form.

On this website you can submit your new questions. Please look through our complete FAQ database beforehand:

The following questions and answers have been very kindly compiled by author and researcher Karl Heinz Asenbaum over the last 12 years (!) and these are continuously updated and extended. These FAQ’s and a few more dealing with the subject of water and water treatment can be found in German on his knowledge database.

How should activated water be stored?

Herbert F.: The new water ionizer is being used for the last few weeks in our accountancy office by our co-workers. I even offer our clients a carafe of water as an alternative to coffee, tea and fruit juices during consultations. The glass carafe now has a milky white stain which is mainly at the bottom. A co-worker has already asked me what kind of a sediment that is. I also discovered, reading in between the lines, that the main question was: is the water really as healthy as he has proclaimed? Having a few sceptics in the business this is grist to their mills since they question the well intended gesture. I would like to answer competently the questions that have been posed. How should the glass carafes be cleaned to let the purity of the water shine through or are there more appropriate containers for presenting the water?

For how long can I drink activated water? How long is it activated? When does it loose its benefit?

What is the difference between electrolyte water and activated water?

Engelbert D.: At an event a doctor showed me the unique effect of Kangen® water. Now you write in your book “Drink yourself alkaline” only about alkaline water”. What is the difference?

Johannes R.: How long can I drink the alkaline activated water? How long is it active? When does it lose its usefulness?

Dating back to the researchers Prilutsky and Bakhir (electrochemically activated water: anomalous properties, mechanism of biological action, Moscow 1997) one understood the period in which an exceptionally low redox potential in the alkaline activated water can be measured under relaxation time. This is different from place to place, from water to water, in all climate conditions. It is difficult to predict. Ultimately you don’t get around to an empirical measurement.

Alkaline activated water can, compared to acidic activated water, keep for years under favorable conditions, it has a very low relaxation time of a few minutes up to a few days. This is a so-called metastable state. Hydroxide ions and the hydrogen content contribute to this index parameter directly. Also, the nature and quantity of the cations plays a role.

The most volatile parameters are the H atoms generated at the cathode, their antioxidant capacity one can demonstrate, for example, by reduction of tungsten trioxide. Hydrogen atoms unite quickly to H2 – molecular hydrogen – hydrogen gas. Both are very powerful antioxidants.

Since the year 1997 Sanetaka Shirahata (Shirahata et al., Electrolyzed reduced water scavenges active oxygen species and proteins ECTS DNA from oxidative damage. Biochem. Biophys. Res. Commun., 234, 269174, 1997) has also constantly discovered atomic hydrogen in activated water and it has been discovered and proven that this atomic hydrogen on a DNA level protects against oxidation from free radicals.

Also since 1997 different hypotheses have developed about where and how long these hydrogen atoms “park” before they bond as hydrogen gas. For example, Dietmar Ferger represents the hypothesis of the so called alkaline nano mineral colloids, which is neither contradicted nor proven. Quote: Ferger, “Jungbrunnenwasser”, Weil am Rhein, 2011, p. 71.

“There is virtually an ‘electron cloud’ that surrounds alkaline minerals and hydrogen and binds them together. So also the hydrogen is negatively charged and activated, and therefore > activated hydrogen < is produced." If the aforementioned borderline scientific explanation for the behaviour of alkaline activated water is actually correct and needed, is doubtful. For also the antioxidant properties of water, which is merely enriched with hydrogen gas, fulfil my expectations as an adequate explanation of the phenomena. It is quite clear that the hydrogen saturation is entirely responsible for the negative redox potential. If the somewhat more difficult to measure hydrogen content decreases, then the the redox potential (ORP) also decreases. So it is ultimately irrelevant whether one or the other value is determined. In flow through ionizers where the water in a pressure tight electrolysis cell is ionized, in the cathode chamber a relief of hydrogen gas is produced, since under normal conditions there is only a maximum of 1500 microgram/l hydrogen gas in water, although during the electrolysis substantially more will be created. Therefore, when flowing from the outlet hose of a water ionizer hydrogen gas bubbles are formed and after a few seconds evaporate into the atmosphere, provided that they are not drunk with the very fresh, bubbling alkaline activated water.

With a non-pressure-tight batch ionizer, activated water can be fully saturated with hydrogen gas in the cathode chamber. The formation of bubbles and the outgassing of the surplus hydrogen already takes place during the longer electrolysis process.
Both with a batch ionizer as well as with a modern 9-electrode device I was able to produce with alkaline activated water with a complete hydrogen saturation and over saturated water up to 1800 microgram/l , but within minutes it falls back to the normal saturation.

Since the beginning of 2007, research of Shigeo Ohta can hardly be doubted that hydrogen gas (H2) is the decisive share of the antioxidant capacity of alkaline activated water. (Overview: Ohta, P., molecular hydrogen as a novel antioxidant: overview of the advantages of hydrogen for medical applications, Methods Enzymol. 2015;555:289-317).

It is therefore essential to ensure that a water ionizer must be designed so that in the event of a drink the ideal pH values of 8.5 to 9.5  are reached with as much dissolved hydrogen gas in the water. Compared to the model of Nihon Trim, which Shirahata used in 1997 and therefore reached in the drinking pH range a hydrogen content of only between 200 and 350 micrograms/l, here between 2010 and 2015, significant performance increases were reached with more than 5 times those amounts reached. Other new techniques have already as a  prototype have reached the complete hydrogen saturation of 1500 micrograms. For further issue of hydrogen saturation please read the FAQ hydrogen rich water.

A decisive factor is the extension of the relaxation time by preventing the outgassing of hydrogen. For we cannot always drink freshly ionized alkaline activated water immediately. This shows a clear advantage in the combination of a very dense materials such as stainless steel and thick blue glass when storing the bottles horizontally after having completely filled the bottles, no air bubbles. We have tested the following materials and after 19 hours of horizontal storage (except crystal carafe) they have been measured again in the Refrigerator: 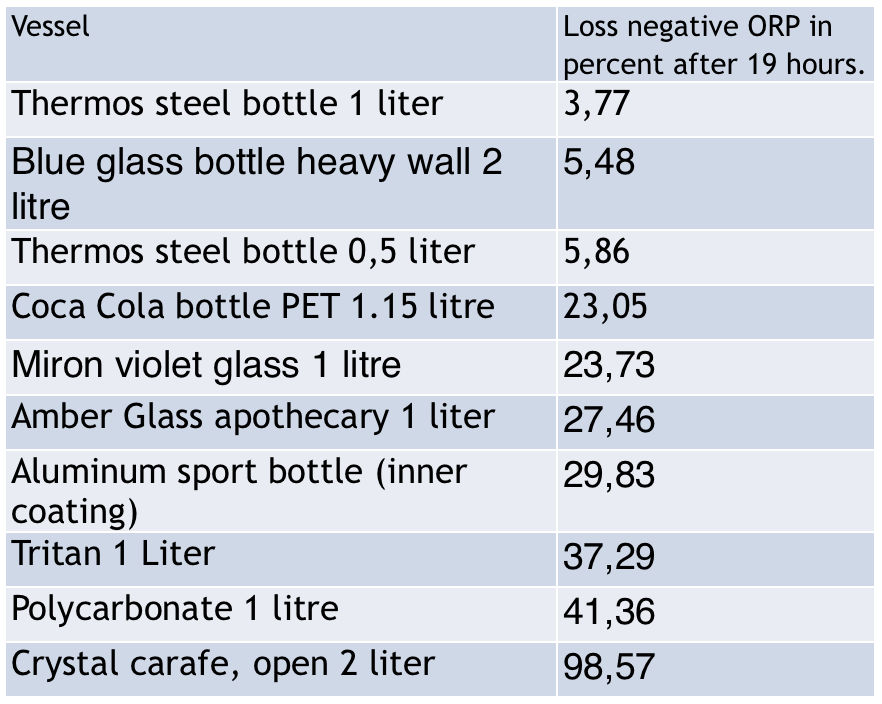 One of the most interesting questions is of the active hydrogen which Hidemitsu Hayashi, a top Japanese researcher who works extensively in the field of alkaline activated water. Also, the molecular biologist Sanetaka Shirahata is at the forefront in this area. The German biologist U. Warnke speaks of “H-minus water”. (Source: Interview in practice: nature 4/12).
This means the normally highly unstable hydrogen anion H-. You can hardly measure so quickly, how it gives off its excess electron H + to a much bigger reaction partner, or at least a hydrogen cation. However, there is growing evidence that hydrogen anions alongside strong cation clusters,  known as mineral colloids with positive external charge, could temporarily park there.

The theory of hydrogen mineral colloids comes closer to understanding the strange behavior of alkaline activated water. For clearly in the beginning there are more cations gathered than what can be kept in this water.

Hydroxide ions are not known to be particularly volatile, because chemical lyes are stable for a very long time. Their excess electrons are kept  longer and therefore cannot be responsible for the abnormally low redox potential of alkaline activated water.

Hydrogen is extremely volatile, it cannot even be contained in most storage vessels. If during electrolysis quickly produced hydrogen anions actually complete a “Park”time with mineral cations, this is a plausible explanation for the falling out of cations in a period of 0-36 hours, which is usually observed.
It is interesting that certain minerals from slate studs like in Nordenau, Germany, can apparently hold activated hydrogen, without a noticeable redox potential prevailing. So far, the reasons for this are not clear from the research literature.

Back to your question and my experience after thousands of measurements of oxidation reduction potentials: you get the most benefit from drinking it immediately. Great benefits within the first 3 hours. A high benefit up to 36 hours. Good benefits up to 48 hours. After the water has normalized electrochemically, the ionized mineral surplus has been visible and the water is softer. It is still a useful drinking water, but you should use it for tea or watering flowers.

Link to this post | Relaxation time of activated water